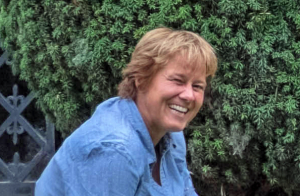 I was deeply shocked when I heard that Tanneke Schoonheim had passed away. How could that be true? Tanneke, there was no need for a last name, was always there and you could always count on her. It didn’t occur to me that that could ever change, but it did. It is true, she is no longer with us. We will have to learn to live with that hard and barely comprehensible truth.

I knew Tanneke for some time, but I got to know her even better when, at my request, she joined the organising committee of EURALEX 2010, which was organised by the Fryske Akademy in Leeuwarden. At one point she came to Leeuwarden every week from Leiden, a two-and-a-half-hour train ride. There was little that was too much for Tanneke. Because she realised how important the Frisian language was to us, the language of our meetings continued to be Frisian. That was typical of Tanneke; she always made sure that everyone was as comfortable as possible. Anyone who met/knew Tanneke will know what I mean. There was always that atmosphere of being natural and unassuming. She never boasted about anything. She also expressed her attitude to life in her clothes, which were mostly informal and modest. In everything she stayed close to her personality. At the same time, she knew exactly what she wanted, and didn’t let anything (visibly) upset her.

In 1983 Tanneke went to study Dutch in Leiden, where she graduated as early as 1987. She became a student assistant at the then INL (Institute for Dutch Lexicology), now called INT (Institute for the Dutch Language). She obtained her doctorate in 2004 with a dissertation entitled Vrouwelijke persoonsnamen in Holland en Zeeland tot het jaar 1300 (Female Personal Names in Holland and Zeeland up to the Year 1300). Frieda Steurs writes in her In Memoriam that Tanneke was given a lot of responsibility right from her first steps at the INL: first as editor of the Vroegmiddelnederlands Woordenboek, and after 2000 as editor of the Oudnederlands Woordenboek. She was one of the few linguists with great expertise in Old Dutch. After 2005, she became head of the Descriptive Historical Projects Department, deputy project leader of the Woordenboek der Nederlandsche taal, editor-in-chief of the Oudnederlands woordenboek and one of the chief editors of the Etymological Dictionary of Dutch. From 2009 to 2016, she was head of the Department of Description and Production and editor-in-chief of the Algemeen Nederlands Woordenboek.

Tanneke devoted everything she had to the INT, and thus to the Dutch language. Sometimes she even gave more than she had, and for that she had to pay a price, but her commitment remained undiminished, even after she had conquered cancer. Tanneke gave the INT a face to the outside world; indeed, Tanneke was the INT. You did not ask the INT for advice or help; no, you asked Tanneke. When I asked her if the Woordenboek van de Friese taal could be included in the integrated language bank of the INL, she was immediately enthusiastic, even though the INL was mainly an institute dedicated to the Dutch language. Tanneke helped to shape the collaboration between INT and the Fryske Akademy. The editors of the new online Dutch-Frisian dictionary will reap the benefits of Tanneke’s efforts for the Fryske Akademy for a long time to come. In 2012 the Fryske Akademy appointed her as a member out of gratitude and recognition for what she did for the institute.

After EURALEX 2010, Tanneke and I met many times in a European context. Together we were on the board of EURALEX. There too, she was and remained the no-nonsense Tanneke, who was sometimes slightly surprised by the attention paid to what she saw as less urgent and compelling subjects. That is not to say that she was not impassioned; she was always impassioned. She succeeded me on the board as secretary treasurer, as if she wasn’t busy enough already.

Internationally, she maintained a high profile. Steurs rightly points out that the highly successful European Network of e-Lexicography (ENeL) was expertly run by her. Thanks to her the ENeL grew into a wonderful network of more than 230 partners. Steurs notes that Tanneke was particularly in her element when she was able to combine substantive work and planning, organisation and financial reporting. I already knew that Tanneke from EURALEX 2010. For the next project, the European Network for Combining Language Learning with Crowdsourcing Techniques (enetCollect), Tanneke designed a new application “Taalradar” together with the IT group of the INT.

Globalex aims to facilitate knowledge sharing and cooperation among its members and with others concerned with language and language technology; promote the creation, research, exchange, dissemination, integration and use of lexicographical resources and solutions; and enhance interoperability between academia and industry worldwide.

That was Tanneke all over. In the objectives of Globalex, she must have recognised her commitment to help and share in a solution-oriented way. As recently as last month she arranged the registration in The Hague of Globalex as a non-profit organization.